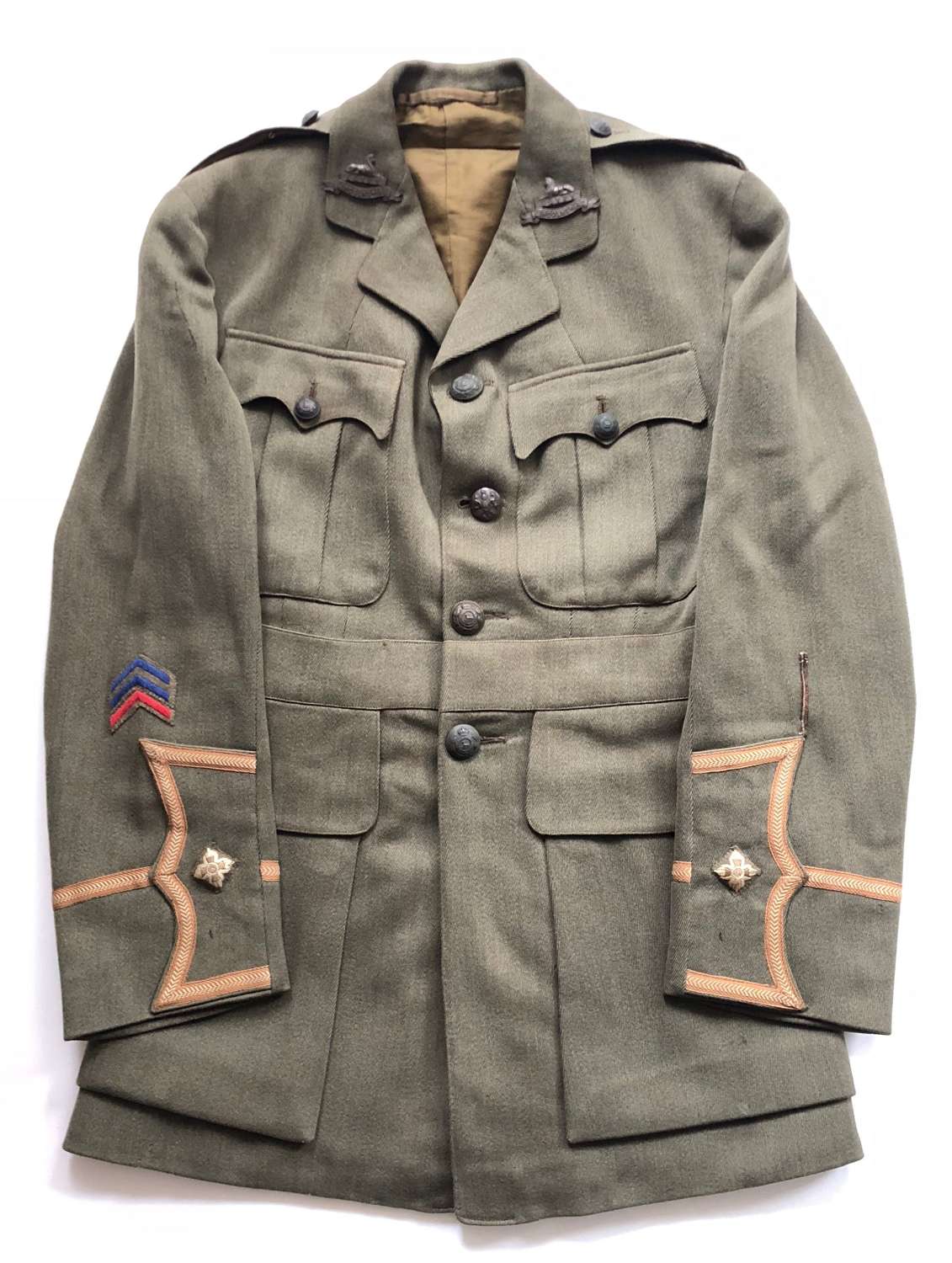 A very good example worn by Second Lieutenant Douglas George Gilpin. The tunic is the regulation pattern with rank star and lace to each cuff denoting a Second Lieutenant. The left sleeve with a bullion wound stripe. The right sleeve with one red and two blue overseas service chevrons. The inside pocket with a London tailor’s label and ink name of “D.G. Gilpin May 8th 17”. Complete with regimental collar badges and buttons. One button replaced with a GS button of matching dark colour. The overall condition is superb and clean. Measurement armpit to armpit about 18 inches. This is one of the best condition Officer’s tunics I have handled Superb condition. In the pocket is a receipt dated 15th August 1918.

Second Lieutenant Douglas George Gilpin was a South African living in Grahamstown, he volunteered in August 1914 for service with the 1st Eastern Rifles and after training was deployed to fight in German South West Africa. The regiment saw action and Douglas’s family received news that he had died of wounds. This proved false and after the defeat of the Germans the Regiment returned to South Africa and Douglas travelled to England and was Commissioned into the Lincolnshire Regiment December 1916. He served in France and was wounded with a gunshot wound to the neck. He resigned his commission in 1921 having at one time held the rank of Temporary Captain.

Article found on the internet that mentions this tunic:

The life of Douglas George Galpin (Pops) - Emma Hepplestone Once upon a time, there lived a great man. This man had a heart of a lion, the soul of an angel and the intelligence of Einstein. This man liked to call himself Pops. Not because he was old, but because he had lived long enough. With a loving family, and a prosperous life, he did not wish to be called something else. This old man had a life of war, and life of hope. He had the courage of those who dare to explore, and the bravery of those who dare to fight. Yet he was as peaceful as an undisturbed lake. His positive mind shone like the sun on a Sunday morning. This is the tale of Pops. Emma wearing Douglas Galpin's jacket and hat from the war. Pops was born in 1898, in Grahamstown. He had a rich family, who loved him dearly. In 1914 he volunteered to enter World War 1 with his six brothers. Courageously, his company made their way to West Africa, where he rode in the mounted cavalry unit. Once there, they captured the Germans and continued to France. There he fought bravely in The Battle of Somme. Only those with the bravest of souls and the most determined of hearts fought. Unfortunately, many died and many were injured. There Pops was shot. Right through the neck. He was thought dead, but then he started crawling to safety. It took him a full day to crawl from behind enemy lines and get medical attention. Six of Pops s siblings died in the war but they died not forgotten and lived on in the hearts of their family. When Pops was healed, he travelled to the Knysna Forest, were he was terribly sick. Once again, he was expected to die. But there, in the forest with the woodcutters, he healed, getting stronger and healthier by each day. His hope was unwavering. Once recovered, he made a new life and farmed sheep in the Karoo. A humble life for a grateful man. On the farm, Pops met the love of his life, Joan Hatchard/Galpin, (she preferred to be called Granny) and married her. Granny was the one of the first female lecturers in South Africa and lectured in Botany. Pops was such a good farmer, he managed to acquire land on the Eastern Cape coast near Grahamstown. There, Pops and Granny moved. They lived a happy long life together and had a single son, my grandfather. With great sorrow I say that Pops died at the old age of 84 from a stroke, but Granny carried on living. However, from the day Pops died, Granny never spoke a single word again and eventually she passed away peacefully. 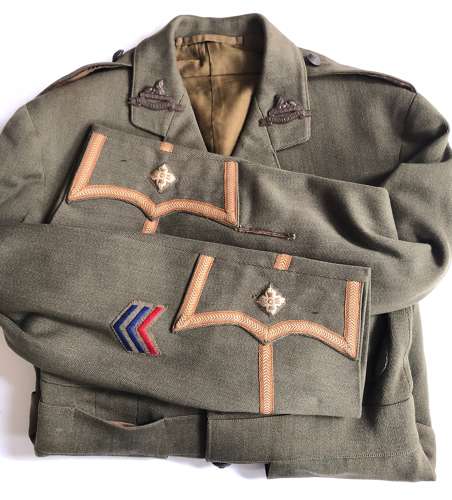 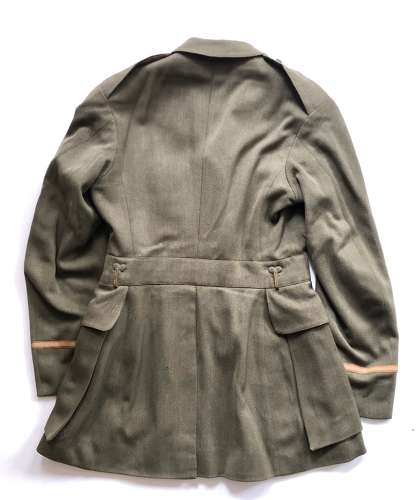 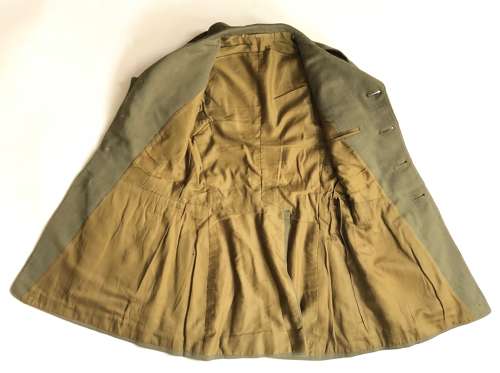 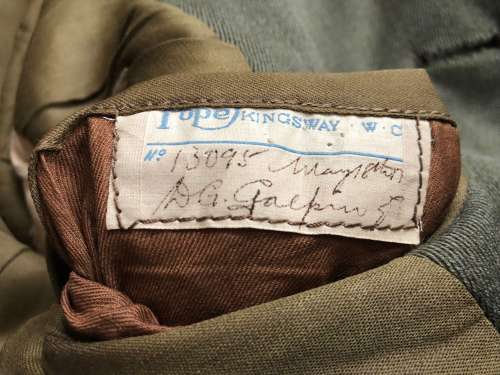 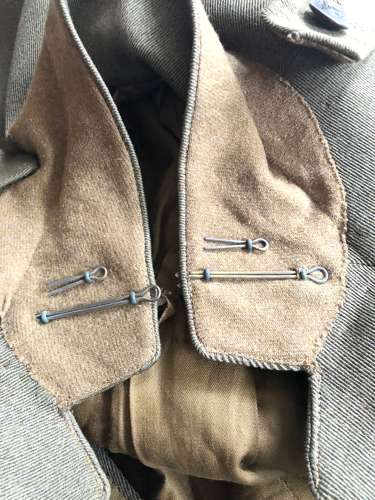