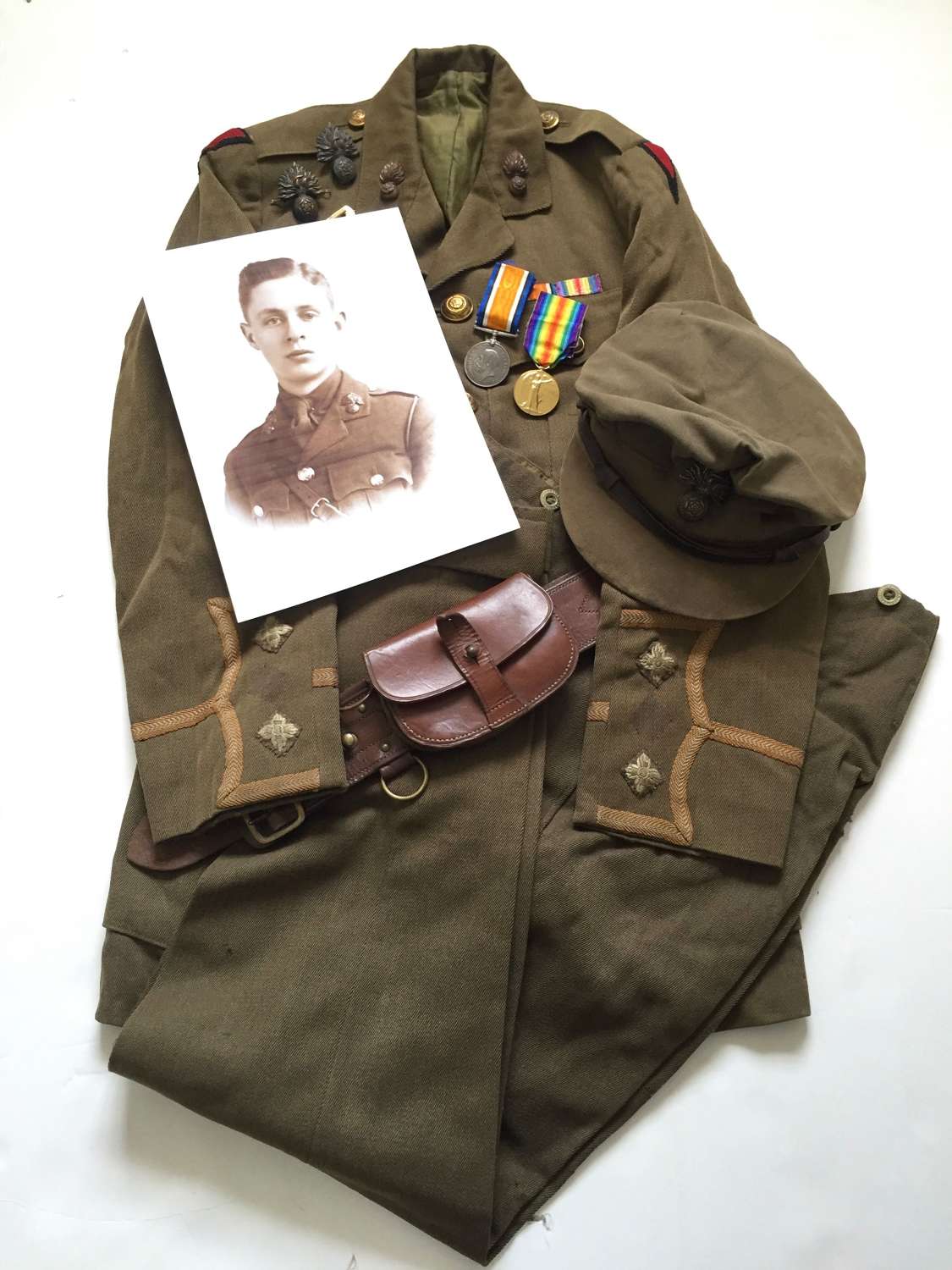 A rare grouping of items including Divisionally badge cuff rank tunic worn by Lieutenant Charles Roberts who is confirmed as serving with the 11th Bn Royal Fusiliers in the front line trenches from April 1918. Comprising: Officer’s Cuff Rank Tunic. I believe without doubt that this is Lt Roberts trench tunic due to the fading and wear of the cloth. This is confirmed by turning the collar and where he has been promoted to the cuff rank. The tunic is complete with original cloth Battalion formation badges confirmed in Waring Pamphlet No.2 item number D324. Complete with Royal Fusiliers buttons and Collar badges. It is interesting to note that the collar badges have been changed during service to a recorded alternative regimental pattern (original collar badges are included in the grouping). The badges are on blades and I believe it is possibly done to conform with a Battalion distinction. The overall condition of the tunic is good few minor moth nips. Overall Trousers these tailored with turn ups and retain and original named tailors label dated January 1918. The rank is given as Cadet indicating ordered prior to commission and finished after he was commissioned. These have some moth holes. Officer’s floppy trench cap, this again with service wear indicating worn in the front line. It is interesting to note that Lt Roberts has used a blackened Other Rank’s Cap Badge on slider, there is no indication of a badge with blades having been fitted. The interior with a Birmingham tailors label Sam Brown Belt. This the belt and ammunition pouch only, the inside of the belt with name and 11th Royal Fusiliers. Medals British War & Victory Medal named to “2. LIEUT C. ROBERTS” Small quantity of Royal Fusiliers badges and buttons A Copy photograph of Lt Roberts wearing his tunic. The overall condition is good considering that this is mostly likely a front trench worn tunic and cap.

Lieutenant Charles Roberts was commissioned into the Royal Fusiliers in December 1917 and the Battalion Diary notes that 2Lt C Roberts joined the Battalion on the 21st April 1918. (Page 327). Looking through the diary the Battalion saw heavy action during the following moths until the 11th November. 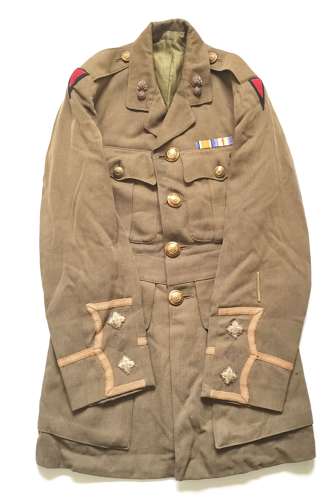 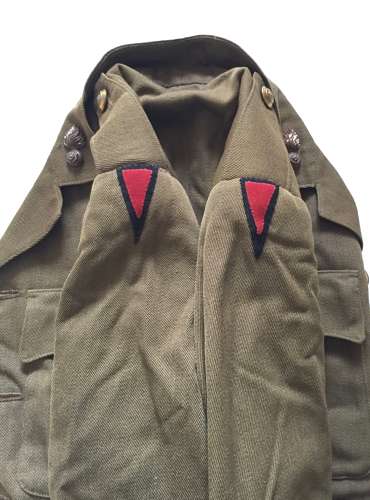 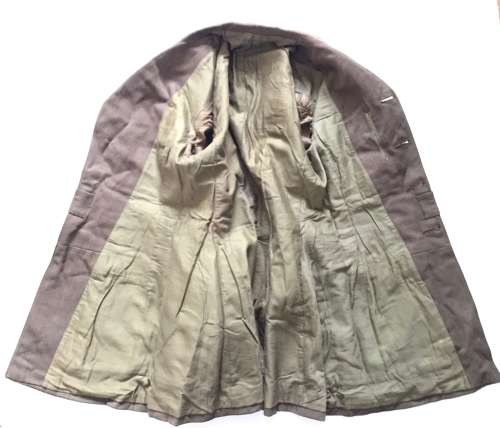 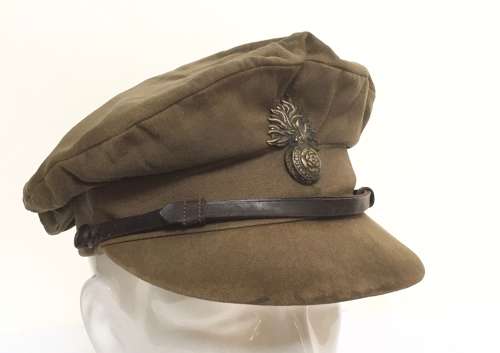 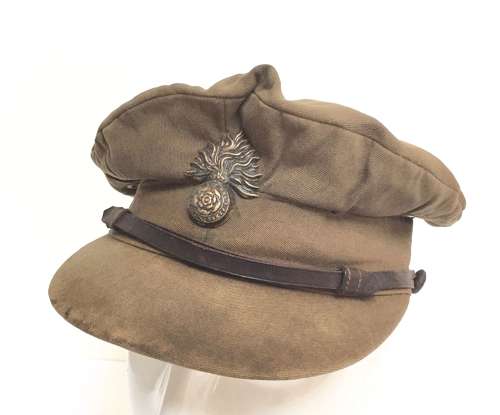 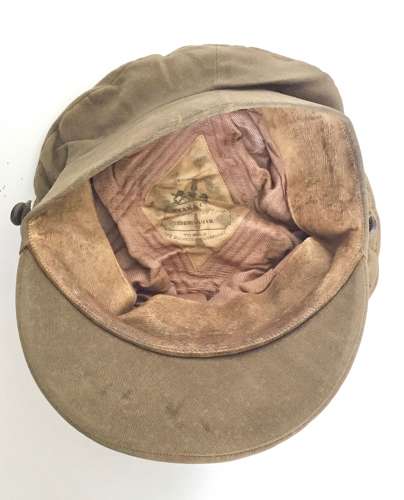 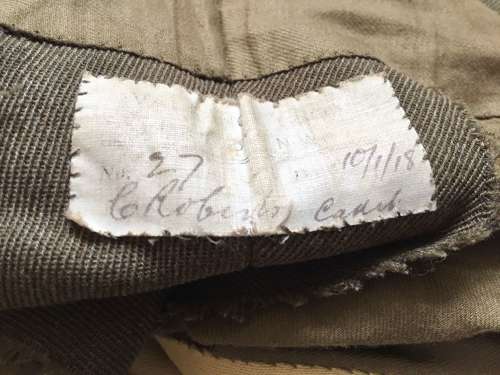 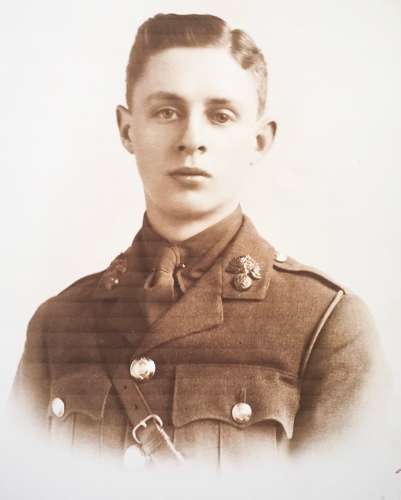 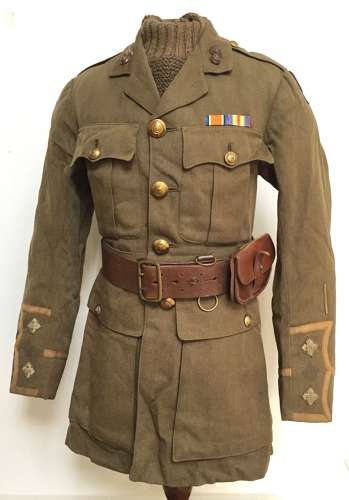